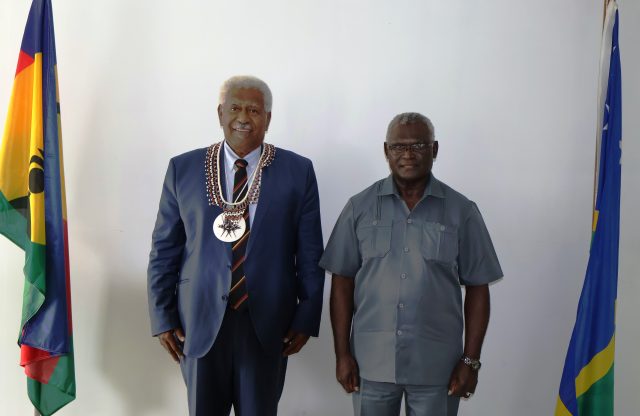 Prime Minister Hon. Manasseh Sogavare today had an audience with a delegation from the Congress of New Caledonia led by Congress President, Hon. Roch Wamytan.

Prime Minister Sogavare thanked Hon. Wamytan for the request to meet and warmly welcome him to Solomon Islands.

Discussions centred around FLNKS (pro-independence group) political struggle for New Caledonia’s decolonisation and sovereignty from its coloniser, France. The Hon. Prime Minister was also briefed on the position of the FLNKS on the outcome of the third referendum vote in 2021.

Prime Minister Sogavare fully acknowledged, “the issue of voting during the last referendum held in December 2021 is an internal matter for New Caledonia and France to resolve the political impasse and agree on a process to lead the way forward and that Solomon Islands will support this in every way possible.”

The Prime Minister was also informed on the proposed approach by the FLNKS requesting support from Melanesian Spearhead Group (MSG) on a proposed draft UN resolution requesting an Advisory Opinion from the International Court of Justice on the legitimacy of the outcomes of the third referendum vote in 2021. The Hon. Prime Minister assured Hon. Waymtan of Solomon Islands support and also request the MSG to explore options for supporting FLNKS request.

He assured FLNKS, as a fellow Melanesian country, Solomon Islands welcome the political update on the institutional future of New Caledonia and their membership of the MSG.

The courtesy call on Prime Minister Sogavare was preceded by an MoU signing on Inter-parliamentary Partnership between FLNLKS and the Speaker of the National Parliament, the Hon. John Patteson Oti.

President Roch was also given the opportunity to observe the start of the Parliament business this morning.