A feature-length documentary about a community living under existential threat of climate change in one of the most places of the Pacific Ocean has been produced and launched this week. 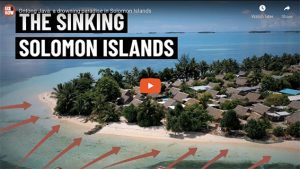 Two filmmakers from Europe who visited Solomon Islands in 2018 to document the effects of Climates change on Ontong Java in the Malaita Outer Islands have put together the documentary which was released on Wednesday this week.

The film features intimate interviews with people in Ontong Java community and in Honiara who feel affected by climate change. It is directed and produced by Guus Schuijl (The Netherlands) and features magnificent drone footages from Iggy Pacanowski (Poland).

In an interview with Schiijl via facebook yesterday he said “I didn’t know anybody when I came to the Islands, but I told everybody that I was interested in climate change”. From that point onwards many people who felt compelled to share their experiences came to me. I tried to follow their lead and to learn from them”.

He said the film follows several people as they go about their daily lives on the island. The effect of Climate Change unfolds through these casual experiences.

“To me, the most fulfilling part of this experience was to build close friendships in such a short period of time,” he said.

Schiijl said the hospitality of the people surprised him but it’s easy to overlook that a silent and almost invisible tragedy is unfolding.

“It’s easy to stop seeing the effects of climate change when you’re in such a paradise,’’ Schuijl explained.

He said the documentary is partly set on the Ontong Java atoll and partly in the Lord Howe Settlement in Honiara.

Roughly, a quarter of the community has already relocated to the city.

Schijl pointed out that the motivation of people to relocate is almost never cited to be climate change but more practical reasons such as work, education and to be with family members.

“The most valuable lesson I learned from climate change is that it works indirectly. It almost works like poison. It slowly enters a community and takes little things away. It’s not big, fast and dramatic. It’s easy to overlook and to ignore until it’s too late to do,” said the Dutch.

The film also features interviews with government officials and community leaders who are at the forefront of combatting these issues.

“People often tell me that the situation is hopeless, but I disagree. Just ask anybody in the community. The people of Ontong Java are resourceful and they have plenty of ideas. Some people are rethinking agriculture, others are building sea walls. I believe that change start by constructive dialogue with chiefs. Climate change is real and it is happening right now. By the end of this century, the sea level will have risen with 1 meter. And the main village on the atoll lies between 0.5 and 1.5 meter above the sea level,” he said.

The film can be watched for free on www.ontongjava.com.