Speaking during the launching and declaration ceremony Minister Togamana said, having the area registered under the Protected Areas Act 2010 is a daunting task but a huge achievement in itself. He thanked the communities and partners of Sirarae Tribal Forest Conservation for working together to fulfil the stringent process and requirements under the Protected Areas Act 2010.

The Minister also acknowledged the support of the Natural Forest Resource Development Foundation who are very instrumental and supportive over the years until the launching. He said the Organizations Mantra of FOREST IS LIFE fits perfectly well and sums up the foundation of protecting our forests.

The National Government through the Ministry of Environment, Climate Change, Disaster Management and Meteorology, the Choiseul Provincial Government, the Lauru Land Conference of Tribal Community played a very important role in supporting the project. Technical and Financial support came through various projects such as Critical Ecosystem Partnership Fund (CEPF) and the Global Environmental Fund (GEF5).

Minister Togamana spoke highly of the tribal chiefs and leaders of Siparae Land and said their leadership and wisdom is greatly valued for bringing their people to a new era of managing their forest land is significant as it forms part of the Kolobangara River catchment area that provides so many ecosystem services to its surroundings.

For the Sirapae Tribe the idea to protect their land came through the realization that most forests in Solomon Islands are now threatened by unsustainable logging and mining and this declaration gives hope that part of this fundamental natural resource is protected to safe guard essential services for the tribal members and to conserve biodiversity and cultural heritage. 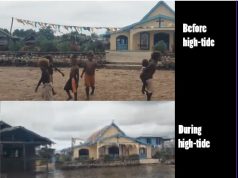 Team completes Integrated Vulnerability and Adaptation Assessment in Reef Is