The signing ceremony took place on 18 November 2022 at the St. Nicholas School in the presence of the Secretary to Prime Minister and Chair of the Sol2023 National Hosting Authority Dr. Jimmy Rodgers, the Principal and staff of St. Nicholas School, Officials from the Australian High Commission in Solomon Islands, the CEO of the National Sports council and officials from the NHA Secretariat.

In a statement during the official signing Ceremony Acting Australian High Commissioner Ms Vincent said the Australian Government recognises the importance of the games which are important to Solomon Islands and the Pacific Family.

“The Pacific Games are important to Australia because they are important to Solomon Islands and the Pacific Family.  They are an opportunity for us all to come together in support of our Blue Pacific Region. We share a love of sport and look forward to friendly competition with Australia being invited to participate in nine sports.  We will be sending our largest ever team to the Pacific Games with a contingent of 150 athletes.”

“The signing of the direct financial arrangement, follows through on a commitment made by our Minister for International Development and the Pacific, the Hon Pat Conroy on 9 August 2022 during his visit to Honiara, alongside Prime Minister Sogavare. A core part of our funding will be for the refurbishment of school dormitories (SBD54 million) in Honiara which will serve as athlete accommodation during the Pacific Games. These refurbishments will be an enduring legacy; providing, safe, accessible and quality accommodation for students who need to board in Honiara to complete their senior school education” said Ms Vincent.

“On behalf of the Minister of Finance and the government of Solomon Island, we are very grateful to the government and people of Australia for the funding assistance of $100 million Solomon Dollars.”

“NHA has through the Games Facilities Committee and the Project Management Unit has completed preparations to commence the immense task of refurbishing 52 buildings across these 7 educational institutions in preparation for the games. As part of the local content and supporting the local economy, the NHA has engaged 85 local building contractors and this project has created 1036 jobs.  The NHA has also engaged 4 local hardware and material suppliers,” Dr. Rodgers said.

In setting up the Games village to accommodate athletes during the games period next year at the schools, the funding from the Australian Government through the NHA will leave further a games legacy that will benefit the schools and learning institutions located within close proximity to the games venue. The classrooms and dormitories will be upgraded and maintained to a new standard that the students of the schools concerned be able to enjoy their upgraded facilities.

The budget allocation for the games village construction works is approximately SBD $56,358,980.00.

Ms. Vincent also highlighted that Australia has been a long-term supporter of the Pacific Games with five volunteers from Australia’s Volunteers offering training and support for Solomon Islands elite athletes at SINIS as well as funding through sports diplomacy grants.

Both officials also recognised the physical presence of the Principal, staff and students of St. Nicholas schools for allowing their venue for the occasion and have assured them on behalf of the recipient schools of their commitment to see the successful completion of the projects in promoting the legacy of the Games.

With the signing of this agreement, the physical works will now commence in early December of 2022.

The NHA is working closely with the Ministry of Education and Human Resources Development as well as the educational institutions to ensure that disruptions to the school curriculum is minimal.  It has been projected that the school upgrades will be completed by September 2023. 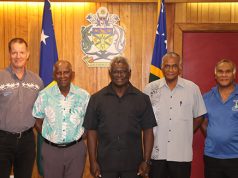