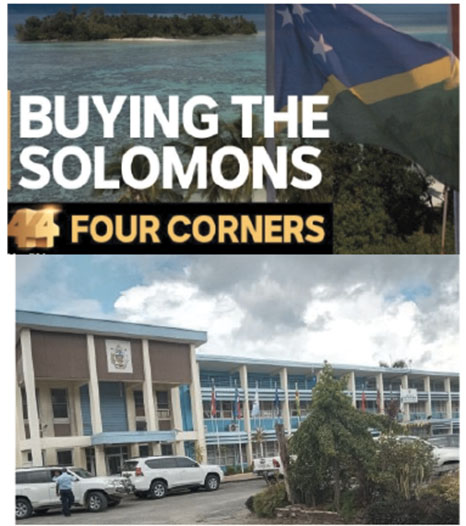 It is unfortunate Solomon Islands, a Small Islands Developing State with Least Country status and its less than three year relations with the People’s Republic of China has come under intense attack by ABC in the name of investigative journalism.

Solomon Islands continue to defend the interest of the state and its people and remain committed in giving a better quality of life for its people. We will not allow bad press to grow seeds of disharmony in a country that is going through its nation building process.

The title of the program, “Pacific Capture: How Chinese money is buying Solomon Islands,” In no uncertain terms the program is designed to turn Solomon Islands public against our bilateral relationship with China.

Media freedom must not be used to undermine a state’s stability based on misinformation and biased reporting.

However, we have not made much progress in developing our infrastructures.

Hence, the current political will to develop adequate infrastructure to support our development aspirations.

What ABC continues to highlight is China’s plan to build a military base in the Country which Solomon Islands Government has no idea about. There will never be a Chinese military base in his country, any such deal with Beijing would undermine regional security, make Solomon Islands an enemy and put our country and our people as potential targets for military strikes.

Solomon Islands as a country has experienced the effect of war first hand during World War 2, a war that was not of Solomon Islands making. As a country and people, we continue to suffer from the aftermath of this war through the UXOs that continues to kill our people to this very day. We know and feel the cost of war to this very day, decades after the war has ended. We would not do anything to have a repetition of that.

There is no military base, nor any other military facility, or institutions in the security agreement with PRC. This very important point has been reiterated to our Pacific family.

Let me clear the air here once and for all, the Solomon Islands- China relationship is about help improving people’s lives- build roads, bridges, wharves and airports NOT to build a military base that does NOT serve Solomon Island’s interest.

There is no need for Australia to be worried, let alone the author of the article.

Fear can only be for those who lack the understanding of the KFPL investment in Kolombangara Island, Western Province. KFPL is jointly owned by the government through ICSI and a Taiwanese company Elite Idea Ltd at 40% to 60 % share respectively. SIG ensures that the share proportion remains at a level the government will maintain its influence in the business.

KFPL future development is prescribed in the government policy. One priority of the DCGA is to recognize the landowners’ involvement in KFPL investment. The SIG government since 1992 promised the people of Kolombangara to take ownership of the KFPL investment. DCGA prioritizes that and has declared 20% share to be transferred to the people of Kolombangara through their established statutory entities.

Just recently in July 2022, DCGA further instructed its agencies to facilitate all the required processes for the transfer of 20% share to the people of Kolombangara. It is therefore, senseless for the four corners to say that KFPL in Kolombanara will be sold out. There is no deal on the table and any other investment interests in KFPL can only come after the interest of the people of Kolombangara is accomplished.

DCGA has put the interest of its people and the resource owners first in any development initiatives. KFPL in Kolombangara is one of the forest hubs in the country and any development interests will be to support downstream processing and value addition in forest plantation resources. DCGA and the people of Kolombangara has no intention to sell KFPL to others.

DCGA and the resource owners recognises the potentials of KFPL to contribute more to the domestic and local economy. The resource owners and government have ambitious plan to venture into downstream processing, value addition and other integrated development in KFPL. Both parties recognise that private public partnership (PPP) development approach will best suit all their interests in KFPL. There is no sell out plan as claimed by Hon. Silas Tausinga and 4 Corners.

The fund that 4 Corners is referring to is the fund that was introduced by Taiwan. This fund does not exist anymore. When we switch diplomatic relations, PRC only agreed to continue with these Taiwanese funds for only two years. That two years has since lapsed.

PRC will now support development in the constituencies through projects which is to be overseen by Ministry of Rural Development. The building of Gasini market and provision of boats to assist our local fisherman in the Marovo constituency is an example of this, and so is the soon to be built mini hospital in East Malaita.

The 4 Corners program mentioned that we are the second poorest country in the Pacific and that the PM has done nothing to change this. The switch to PRC is done precisely to change this. Our exports to Australia is less than 1% and our export to China is around 66%. For us to develop we need to trade more. Unfortunately, our ability to trade is hampered by lack of infrastructure and restrictive trade barriers. We have just recently signed a free trade agreement with China. We also look forward to build more road, bridges, airports and wharves to enable our people in the provinces to trade with the outside world. Building more infrastructure that will enable our people in the rural area to trade directly with the outside world should improve our country’s ranking as the second poorest country in the Pacific.

This is the same old tactic that was used in the past by the media and opposition groups to vilify and demonize leaders they do not like. This tactic is used to isolate leaders and engineer regime change. It has been used in the past against the Prime Minister regarding his house at Lunnga, which PM answered on the floor of Parliament. Yet the Prime Minister was removed through a motion of no confidence, even after explaining it on the floor of Parliament.

Our MPs are now aware of this kind of tactic used by the western media. The western media will now target our ordinary people to spread these lies to create an uprising to engineer regime change. They are adamant on creating division within our country to serve their won interest of containing China and spreading anti-China sentiments.

We need infrastructure and development, and if China is able to provide that then we will engage with China.

Our international airport in Munda is currently being upgraded by a Chinese company, CCECC. This project is being funded by ADB and was put on tender and awarded to CCECC. We welcome and encourage any partner that is willing to engage with us in building our infrastructure that will enable our people in the rural areas to participate more actively in revenue generating activities.

DCGA remain in power because we delivered to the people of this nation in the last three years in our reign. Redirection to address COVID 19 continuous impact and November Riots are still ongoing.

This government will continue to serve our people and country regardless of the lies published by the media and the Opposition.

Last year’s riots in the country is a result of concerted efforts by various groups to topple the government because they were uncomfortable with Solomon Islands increasing engagement with China.  These divisive elements are responsible for stoking the disaffection that has led to three days of violent protests in the Solomon Islands. This matter is currently under investigation.

The news of over half a billion dollars in logging royalties slipping through to members of Parliament instead of the rightful landowners is a wild assumption. There is no single iota of truth in this accusation. 4 corners should provide evidence to support this.

Experience has demonstrated, competition in telecommunication provides enormous benefits. Low price, new and better products and services and expending consumer’s choice greater than in a monopoly.

International telecommunication services are particularly important to the development of a stable and powerful economy.

Solomon Islands recently formalized a number of trade frameworks with European Union, Pacific (PACER Plus), United Kingdom, MSG and a non-reciprocal duty free market access with PRC. Broader telecommunication services is an important tool of the free trade agreement between Solomon Islands and the rest of the world.

Furthermore, our geographical make up and separation of islands `makes e-finance very important. These towers will enhance this.

Finally, as a media organization that purportedly holds itself out as a professional with high integrity, the intentional use of misinformation and distribution of pre-conceived prejudicial information speaks so very little of ABC.

ABC is trying to tell the Solomon Islands people that because the Government of Solomon Islands is opening up to partners who are not, in the opinion of ABC, white and does not operate a democratic system it is wrong, unfit and corrupt. This is racial profiling and at best promotes racism and racial stereotyping.

This is disrespectful and demeaning to the people of Solomon Islands and the Pacific Islands. The Kiribati Government had in the past deported journalists for such demeaning attitudes displayed by the media.

ABC or other foreign media must understand that the manner in which journalists are allowed conduct themselves in other Country, does not give them the right to operate in the same manner in the Pacific. The Pacific is not the same as Australia or United States. When you chose to come to our Pacific Islands, be respectful, be courteous and accord the appropriate protocols.

The Solomon Islands Government is deeply concerned that such offensive materials are produced by ABC and are allowed to be broadcasted to Pacific Islands states.