It may be one the remotest constituencies in the country but Shortlands in the Western Province is likely to get top rankings when it comes to better housing standards.

The constituency in the past eight years has seen significant improvements to their standard of living especially in housing. It is very rare now to find old leaf-houses that Shortlanders used for ages. They are now been replaced by iron roofing houses with materials shipped from Honiara to the border constituency with Papua New Guinea.

A senior government official who was at the border recently as part of the COVID-19 awareness team admitted that Shortlands is going ahead at fast speed in terms housing improvement in comparison to where he comes from in Malaita.

“I can’t believe that a lot of the villages have more proper iron-roof houses than those that are made with local material,” he said.

SBM tracked down the MP for Shortlands and the Minister of Home Affairs, Chris Laore to ask him more about the changes now happening in his home constituency.

“What the people are saying is what they see. I have been working hard to improve the lives of my people.

“Over the years we have improved the lives of our people and housing has been one of the key projects of my time,” he said.

Laore said most of the villages in the Shortland Islands have iron-roofing houses and he will work on that during his time at their MP.

“We have been working very hard to reach this far but I can say that most of the villages have more proper houses now than say ten years ago,” said Laore who took over from his brother who died only few months after his election in 2010.

Laore said even in his home village of Nuhu, nearly everybody has a proper roofing iron house except for a few.

“I am hopeful that after my fourth term in office, there will be more people with proper houses than when I first came,” he said.

Besides the houses, Laore also delivered canoe and OBM to his constituents.

“You go to the villages you’ll see that besides a house, I also give them boats,” said the minister of home affairs.

Nubu village in the Shortlands from the air as more villagers own more iron-roof houses than anytime in the life span of the village.

This story was published in our latest Magazine which is now out. 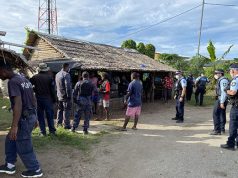 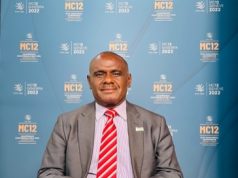