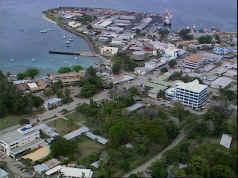 Guadalcanal Province is working with the government and other stakeholders to rename places and streets in and around Honiara with indigenous Guadalcanal names, Premier Francis Mbelande Sade announced today.

Speaking during the province’s 2nd Appointed Day celebrations in Visale, West Guadalcanal, Sade said: “We are also working with National Government and the Asian Development Bank on a Honiara/Greater GP Incentive. Part of this project is the renaming of places and streets in and around Nahona’ara (Honiara) with indigenous Guadalcanal names.”

Sade said in discussions about the national capital, the Guadalcanal Provincial Government has always been persistent in its opposition to any plans to expand the city boundary.

“Consequently, after consultations with the HCC (Honiara City Council) and the Ministry of Lands, Housing and Survey, the Guadalcanal Provincial Government plans to build physical markers to identify the city boundaries,” he said.

The premier highlighted that the Guadalcanal Provincial Government is keenly aware of the many challenges it faces and land is another long-term issue, especially in and around Nahona’ara.

“The sale of customary land continues to be a problem. One of the ordinances that we are working on addresses this issue. Second is the continuing sale of alienated land by those who claim to have FTE titles. For example, the Guadalcanal Provincial Government is concerned about Levers Solomon Limited’s continuing sale of lands in the Lunga/Henderson area.

“I would like to thank the Commissioner of Lands who, on July 20, 2020 cancelled Levers Solomon Limited’s FTE title to sixteen (16) parcels of land on Guadalcanal. This is a good start because this issue needs to be sorted out and Leavers’ status as a foreign investor needs to be investigated and clarified,” he said.