TRANSPARENCY Solomon Islands (TSI) demands that the Executive Government instructs the Commissioner of Police to hold those Solomon Islanders responsible for felling of prohibited Tubi species, and their Asian cronies (Chinese, Malaysian, etc.) to be charged accordingly for breaching our relevant laws. The Laws of Solomon Islands applies to all residing and doing business here in Solomon Islands regardless of place of origin, race or ethnicity.

Following the halting of a big consignment of tubi round logs ready for shipment by the former Minister of Environment Dr. Culwick Togamana Transparency Solomon Islands see the issue as an urgent matter that needs attending to by police.

It is extremely unacceptable to know that reported Tubi log consignment that came under much scrutiny with regard to stoppage of export was felled under a false gazette notice.  This is a shocking revelation to citizens of Solomon Islands. Whilst some have said how unbelievable this is, of the many reports, shared with Transparency Solomon Islands this instance is confirms the suspicious held by many ordinary people and echoed by some national leaders that the leadership of this country is in the pockets of the loggers and miners.  For them to get as far as falsifying gazette notice must send a very grave message to all of us that some of our leadership have sold the country out and that these Asian operators are also corrupting our Judiciary.  Citizens could not believe that the level of corruption could go as far as altering important legal documents or our laws in their favour government office.

TSI whilst acknowledging that there are a handful of good national leaders and public officers, it has become a huge concern that some public officers are aiding the company to acquire the false gazette to fell Tubi. Those authorities or government offices responsible for making the false gazette which has been circulated in social media must expose the officer who made the false gazette and handed him over to the police. This is a serious corruption allegation that should not be taken lightly by the Executive Government for it does nothing to the image of Executive Government nor to our Legislature and Judiciary. This is the kind of corrupt conduct and practice in office that continue to deny the country to progress in development.  It is the white-collar crime of criminals committing offense and were never arrested and prosecuted. This practice continues.  Impunity has become a norm and increasing under the DCGA led government.

Transparency Solomon Islands demands Executive Government direct the Corruption and Fraud Unit of Police, JANUS to investigate the false gazette, arrest, and charge those suspected of creating the false gazette.  The investigation should also cover the Attorney General’s Chamber, Ministry of Forest Research and the logging company concerned. TSI believe that those responsible for the fake document would have been paid huge amounts of cash money for their own benefit and using their position of power to produce the false gazette. This is a very serious offence needing addressing urgently to send a clear message to officers and loggers alike not to abuse and misuse their position of power for personal gain and to the detriment of tubi species.  It will go a long way to rolling back corruption and corrupt conduct in public office. The government after this revelation has no more excuse for not acting. If this very serious matter is not dealt with, some public officers will continue to enjoy the benefits of corruption denying our country the development aspirations it deserves.  As long as the public officers continue this practice of producing false documents in exchange for cash from Asian companies, the laws of this country will be breached time and again for the benefit of a few.  Government should also discuss with its new found friend China where most of the logs end up to put in place policies that help Solomon Islands prevent for logs exported to China. TSI also called on the Attorney General Chamber to clarify legal notice No.35 of Wildlife Protection and Management Act, which the former Minister of Environment denied having any knowledge of it. This is a serious concern.

The company reported to have illegally harvesting Tubi using the false gazette is Samlimsan Ltd, owned by a Malaysian family who had been doing business in logging operation in Solomon Islands for more than a decade now. This company should be declared non-grata in Solomon Islands and be deported from the country for abusing our laws, our Judiciary.  It is very unlikely that the company is not aware of the gazette being fake, nor is it unaware of those responsible for creating the false document, forging the signature of the former Minister for Environment.  They should be investigated, arrested, placed in custody and charged immediately for they are likely to interfere with the investigation with money power. The other alternative is to terminate their license and deport them immediately. It is a daylight robbery of resource owners and the government of this country for someone to collude with a logging company to harvest the unique prohibited species through fraud and false pretense. The officer responsible for committing the offense should not only be terminated but charged, prosecuted and sent to jail. This is the only way we can deal toughly with corruption that will minimize the high prevalence of corruption in Solomon Islands.

Transparency Solomon Islands calls on the Solomon Islands Independent Commission Against Corruption to do its part and investigate this.  It is now almost more than two years since the laws were passed and nothing much coming from this Commission.

The company was reported to have harvest the tubi logs and kept them at the company’s area in Noro ready for export overseas. However, former Minister for Environment Dr. Togamana ordered the halting of the tubi round logs as it breaches the Environment Act and regulations. The admission by the former Minister of Environment that he had no knowledge of the gazette notice bearing his name is a serious crime that should not be downplayed by the government and police. The crime committed here by the government officer and the logging company has a disastrous consequence on the lives of people through damage of the environment and the abuse of office for personal gain. Police must intervene now and arrest the person responsible the false gazette and hold the logging company responsible for not complying with the laws of this country. It would be a shameful thing for the government if the Asian company walk away freely without being held accountable for their involvement in bribing public servants to do the wrong thing in office in order to serve the company’s interest. TSI insists that the matter be dealt with by police and those involve must be arrested and prosecuted as well as terminating or suspending the public officer responsible.

Transparency Solomon Islands will continue to ring the bell on allegations of corruptions that is happening in the country without being attended to by integrity institutions within the government. TSI believes that with the very high prevalence of corruption in the public sector and now unashamedly reaching our legal documents, it is high time the country must work together in fighting corruption given its negative impact on our society.

Government and other donors must relook at funding given to UNDP for Solomon Islands and the Pacific in the fight against corruption and ensure it has impact on the ground than in their reports only. It is time UNDP stops being a donor once given the funds.  It is given the funds because it puts itself out as the expert in anti-corruption advocacy.  To date it has hired stakeholders who have no depth of understanding to tick off their deliverables than actually delivering the program itself.  It is not good enough in the fight against corruption.  Solomon Islanders expert the best to be delivering the program to them.  It is time UNDP do something concrete than the piece meal approach and programs that boasts so huge success in reports.  It is time government revisits how UNDP gets others to tick of its deliverable in the fight against corruption whilst not achieving much.

It is time the government and police must stand firm to say no to what is wrong and support TSI in their watch dog role to speak against corruption and mal administration. Transparency Solomon Islands has no problem with foreign investors operating in the country but strongly advocate against bad investors who did not respect the laws of Solomon Islands, use bribery to make their way through to acquire permission and approval to do certain business activities. TSI will not tolerate bad investors and urged government to keep an eye on issues of concern that may raise the question on the integrity of investors and public authorities. 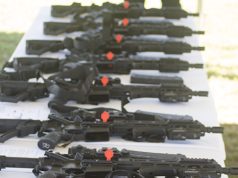 WHO/WHAT IS THE ENEMY?