Lilisiana Community in Malaita was featured as a testimony to the effects of Climate Change to Human Rights holders.

This was during a side event at the 50th Session of the Human Rights Council in Geneva this week.

Thanks to local mulimedia and communications specialist Suluigatan whom early this year made a short film showing the rising tides in his late mother’s Langalanga community of Lilisiana just across Auki town.

A part of the statement about the 50th session of the Human Rights Council reads, “Rights holders face great challenges in asserting their human rights, when it comes to climate change, in having climate related human rights violations recognized as such, in having policies to protect these rights explicitly implemented, starting with prevention policies, and in having effective remedies available and activable, at the closest and most relevant level.”

The film entitled ” The sinking community” starts off with a scene of young children running around on a playground near the front of the local Catholic church building. The narrator begins by welcoming the viewer to Lilisiana ” a community with a growing population of young children and youth”. The film then featured a timelapse of how the high tide pushed its way into the village and covering the space where the children were playing.

Lilisiana is one of the many communities around the Pacific that is faced with the ongoing challenges brought about by Climate Change.

Alex Akwai, owner of Suluigatan was humbled by the recognition of the film being suggested and used as testimony at the session.

“I share the hopes and prayers of my people that our story will touch the hearts of everyone and especially world leaders and policy makers and that some strong and urgent actions are taken to address the plights of my people as well as those of other communities around the country and the Pacific region,” said Akwai.

He further calls on the national leaders and especially the MP for Aoke/Langalanga constituency to seriously address the situation in the local region.

This side event to the 50th Session of the Human Rights Council was organized by the Geneva Climate Change Consultation Group (GeCCco) and the Geneva Environment Network. Link to the film can be accessed through the Suluigatan YouTube channel on https://youtu.be/jN1L81u-Vgs 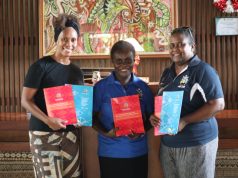