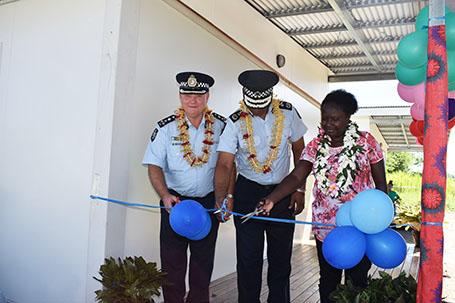 The Royal Solomon Islands Police Force (RSIPF) now has its own COVID-19 quarantine facility at the Tetere Police Station in North Guadalcanal funded by the Government of Australia through the Solomon Island Police Development Program (SIPDP).

Each house is fully supplied with beds, mattresses, tables, chairs and lounge chairs.  Both houses have the ability to sleep up to 12 officers in each house.

The prefabricated buildings are moveable, if required, and can be stacked on top of each other to form double and triple storeys.   The RSIPF Quarantine facility houses have additional roofs and verandas for improved insulation.

Commissioner of the RSIPF Mostyn Mangau says, “The RSIPF has an ongoing partnership with SIPDP.  This partnership commenced in July 2017, at the end of the Regional Assistance Mission to Solomon Islands (RAMSI).  Over the past 3 years, SIPDP have stood proudly alongside the RSIPF to assist the RSIPF in delivering their national security mandate for the Solomon Islands Government (SIG).”

“SIPDP and the Australian government are proud supporters of the RSIPF who is grateful for the financial and development assistance provided in the delivery of the purpose built RSIPF Quarantine Facility.  The idea for this facility commenced not long after the COVID-19 pandemic commenced.  In April 2020, RSIPF sat down with the SIPDP and looked at opportunities where SIPDP funding could be redirected that would allow RSIPF a greater focus on COVID-19 response.”

Commissioner Mangau adds, “These discussions highlighted a need for a standalone centre to house police officers who might be exposed to COVID-19 as part of their duties.  This project wanted to ensure that an officer’s family members were not unnecessarily exposed to the virus. The project commenced in April 2020 and the construction concluded just this week.  Discussions have already occurred with the Ministry of Health and the Attorney General’s Office to gazette the location as an official SIG quarantine site.”

He says, “Following the long-awaited end of the global pandemic, we look forward to repurposing these buildings as RSIPF housing for the police officers based at the Tetere Police Stations.”

Commander SIPDP Mark Ney says, “SIPDP, which is a 4-year Australian government funded police capacity development program continues to provide support to SIG and RSIPF.This bilateral program has included a focus on infrastructure support to the RSIPF and has been fully committed to supporting the needs of SIG and RSIPF.  As we progress through the final year of SIPDP, in its current form, we look forward to renewed discussions with SIG around what is needed after June 2021.”

“One of the key focus of SIPDP, since the commencement of the RSIPF COVID-19 operation, is to support RSIPF deliver a strong, effective and capable operational response.”

“SIPDP, in discussions with RSIPF highlighted the importance of staff welfare.  The close communal living in Honiara identified to us that isolating police who have been exposed to COVID-19 was going to be difficult.  We wanted to ensure that families weren’t unnecessarily exposed to the virus just because a member of that family was a police officer. Due to this concern, SIPDP reallocated funding to go towards a RSIPF Quarantine facility at Tetere Police Station,” says SIPDP Commander Ney.