It has been revealed that based on the current rate of logging it will only take between five to 10 years to completely harvest the remaining four percent of virgin forest that is left from 22% accessible for the logging industry.

Speaking during a Press Tour yesterday in Honiara, Permanent Secretary to the Ministry of Forestry and Research, Dr. Vaeno Vigulu explained that based on data, about 90% of our land mass is forest.

“Around 68% of that is protected and about 22% is accessible and production forest,” he said.

Vigulu stressed that logging activities is only carried out in the 22%, however, he warned that the 68% is currently being threatened because the 22% is almost logged out.

The PS admitted that the recovery of forest is questionable.

He added maybe the loggers’ were harvesting different species because of different demands “but to be honest it is unsustainable.”

Meanwhile Vigulu confirmed that 17 percent is currently being harvested going up 18 percent.

“Only 4% of virgin forest is left. Based on the current rate it will be completely harvested between five to 10 years,” he said.

The PS also disclosed that part of the 68% has been threatened and one way is logging has already gone beyond 400 metres though it is illegal.

Vigulu revealed that his ministry and the AG’s Chamber in 2020 gazetted the ban of logging above 400 metres.

Solomon Islands currently relies on the forest sector as the key contributor to government receipts, export and growth actually.

And, this economic aspect has a significant impact on sustainable forest resource management in Solomon Islands, according to Nishikawa Tatsuji

He said the receipts from logging account for around 20% of government revenue and for around 66% of the total value of export income.

The logging industry provides around 10,000 jobs, which represent 20% of total employment. Payments of royalties to forest resources owners also provide a source of revenue to rural community, where the majority of people lead subsistence lifestyles, with limited access to basic infrastructure and located at long distance from urban center.

As for general logging revenues, “60% may be distributed to logging companies, 25% is to taxes and the remaining 15% is to the community”.

Moreover, if most of these logging industries are foreign companies, and their workers are also foreign people, sustainable forest resource management will be difficult,

For example, the government revenue for 2019 was 2.62 billion Solomon Islands dollars and its 20% as forest sector is 0.52 billion dollars.

“As my calculation, about twice of tax revenue would be gotten to the logging industry, which means more than1 billion dollars per year have been flowing out of the country,” said Tatsuji 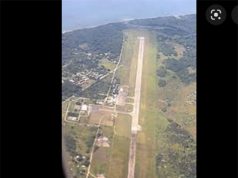