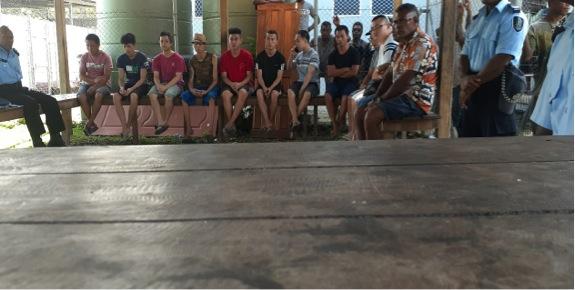 Malaita Provincial Government says it has signed an agreement with members of the Auki Chinese Community that they must not allow any of their relatives arriving on the flight from China tonight to stay in Honiara for one month before they are allowed to enter Malaita.

A statement from the province made the announcement as it said it had helped police and the Chinese community in Auki to resolve a volatile situation in Auki this morning.

The statement said the MPG was made aware of an evacuation notice that was issued to the Chinese Nationals in Auki yesterday evening to leave Auki within 24 hours. The notice was issued by M4D and was claimed to be part of their stand against China’s dealings in Malaita Province.

In responding to the situation, the Provincial Police Commander had dialogue with the MPG and M4D yesterday evening on how best the tense situation can be defused. It was agreed that a meeting between the parties to take place today and that all Chinese soaps must be closed until the issue was dealt with.

“This morning the parties met at the police headquarter and after discussing the issues. The parties agreed to sign an understanding agreement in anticipation of the arrival of the direct flight from China. It was agreed that those who have relatives arriving on the flight must inform their relatives that they will have to stay in Honiara for a month before coming to Auki. And that any Chinese that decided to leave Auki must stay away for a month before they can be allowed back in Malaita.  Also it was agreed that all Chinese nationals in Auki to voluntarily provide their details to the police as well as any future travel arrangements,” the statement said.

“This measure is important to ensure the health and safety of the population of Malaita from COVID-19. Similarly it is also for the safety of the Chinese nationals from any possibilities of people singling them out as the ones responsible for bringing in the sickness into Malaita Province.

“To those who think that MPG is behind this issue, it must be made clear to them that the province is actually dealing with a situation that came about as a result of the decision of the national government to allow a direct flight to China.

“Once again the National Government must be sensitive in making decisions that would put the lives of Solomon Islanders at risk. Naturally when it comes to the health and safety people take this matter very seriously and thus the government must not continue to ignore the concerns of the people,” the statement said.

Shops in Auki have reopened and normal business continues.