The National Government consistently delivers on its 2022 ‘Economic Infrastructure Program,’ regardless of the waves of challenges it faced since coming into power in 2019.

Prime Minister Sogavare explained, Component 1 of the program is Rehabilitation of important access roads. A major one is the routine road maintenance of the Mberande to Mbokokimbo, an important link into Honiara city.

The Government has also commenced and will ensure the completion of the Lomlom ring road in the coming year.

Prime Minister Sogavare further revealed, “under our Sea Infrastructure Programme, we have funded the Tulagi Wharf and is funding the proposed wharf for Chea in Marovo. The Maluu wharf is funded under the economic stimulus package. This is a critical infrastructure to enhance development in the Northern Corridor of Malaita. Overall, we have ongoing rehabilitation programmes for 7 wharves in Malaita.”

He further expressed, the government also attended to its obligation on Donor Funded Projects such as the ADB Funded Kukum Highway project and the Tandai Highway Project.

“In this year’s Development Budget, 12 million dollars has been allocated for these obligations.”

The Prime Minister adds, under its Social Services Infrastructure programme, the government invested in Technical facility and support the Agriculture Pack House at Henderson International Airport.

In Isabel Province, the Buala Town to Hofi Road construction continues until completion.

“In the Temotu Province, the Lomlom Ring Road in the Reef Island is ongoing together with the Tulagi Ring Road at the Central Island Province that will commence in the new year,” he confirms.

The Marasa to Mbabanakira Road on Guadalcanal is out for tender and ready for award. Work on this and the Monga to Kaoka road commences in 2023.

“On Malaita, the Fadilia to Masilana Inner Road is ready to commence in the New year. This includes the Taba to Busuone road and the Okwala to Kilusakwalo Road – which are new roads from Mbaegu to Kwara’ae Regions. It is important to note that the Malaita South Road emergency contract is also underway to ensure that we rehabilitate the South Road,” Prime Minister Sogavare stated.

To ensure copra and other goods are transported and connected to the infrastructure in the Western Province’s Vella region, new bridges will be constructed for Vella la Vella- Mbarakoma and Usamba.

Prime Minister Sogavare is confident, even as the country is hosting the PG 2023 regional event, ongoing and new infrastructure development will also be rolled out comes 2023.

Prime Minister Sogavare attributed the achievements to divine intervention and political stability and development environment determined by all members of the government bench. 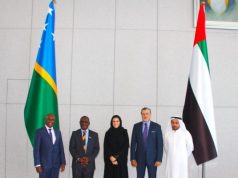