Commissioner of Police Mostyn Mangau revealed to journalists today that with the step up announced by the Prime Minister this week, police numbers could also be increased.

Sogavare announced this week that with the increase of COVID-19 cases on Bougainville, the manning of the western border will be icreased to stop Bougainvilleans from crossing into Solomon Islands. This afternoon Buka on Bougainville has started a 14-days lockdown to control the spread of the virus.

The RSIPF is at the forefront of the step up as announced by the Prime Minister.

When asked how much is the government spending on policing alone on the western border Mangau said currently it is between $300k to $400k a month to keep 69 officers at the border.

He said surely they will need additional resources and personnel to man the border given the prime minister’s announcement.

RSIPF and other SIG agents have been stationed at the border since it was closed in early last year due to COVID-19 cases.

Mangau said his officers are prepared to continue and stepping up their activities on the border. 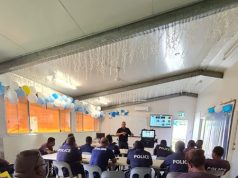