As part of the awards given out at the Business Excellence Awards events, the SICCI Board has developed a new award that is for the most valued partner to the Chamber.
Police Commissioner Mathew Varley is the inaugural recipient of this award. It is in recognition of Mr Varley’s tremendous service rendered to the Royal Solomon Islands Police Force (RSIPF) in the last three years and his commitment in engaging with private sector in the country.
Long-time SICCI Board member, Sir Bruce Saunders said this award is for the most valuable Chamber partner and is a Board decision not like the other awards which are chosen by a panel of judges.
“The award goes to the individual that the SICCI Board decides is to be recognized for his or her contribution to private sector development in the country.
“The Board appreciates the Commissioner of RSIPF for his engagement and open communication at all the Executive Group meetings under the Memorandum of Understanding (MoU) signed with the Chamber in 2018,” Sir Bruce said.
He added: “The Board especially valued the organized approach that the RSIPF took under Mr Varley’s leadership during the national elections earlier this year, and then the election of the Prime Minister afterwards.”

Sir Bruce, on behalf of the Chamber’s members of the private sector, thanked Mr Varley for his service to Solomon Islands and for his part continuing the development of the RSIPF into a police force that is responsive, professional and most importantly, instils confidence in citizens of the RSIPF institution.
“Special mention must be made to Mr Varley’s approach in ensuring that businesses remained important stakeholders in all his communication efforts,” he said.
A special meeting was organized on Thursday 28th November at the Commissioner’s office at the Police Headquarters in Rove, west of Honiara, where SICCI Board Member Sir Bruce, and CEO Atenasi Ata, presented Mr Varley his Certificate of Appreciation as recipient of the BEA award.
Mr Varley will not be able to be present at the BEA event on Saturday 30th November since he will be leaving the country the same day.
A short video was captured where Mr Varley made a short address to the local business community and will be played on the screen during the BEA on Saturday.
“To the Board, Membership and Executive of the Solomon Islands Chamber of Commerce and to all the members of the business community in the Solomon Islands, I’m very honoured to receive this award and to recognize the partnership that exists between the RSIPF and the business community here in the Solomon Islands.
“I’m very humbled to be your Commissioner of Police for the last three years and it has been indeed the greatest professional privilege of my life,” Mr Varley said.
“The time has come to go home, but before I do that, I wanted to say thank you to the community for your support and also recognizing too there is also an important partnership between business and police,” he added.
He said the role of police is to provide the safety and security for the community to prosper, and likewise, the business community has an important role in economic development of this country.
“I’m sure with greater partnership between business and police into the future, the young people of Solomon Islands have a bright future of continued support and opportunities for employment and prosperity for the community more broadly.
“I wish you and Solomon Islands all the very best for a successful and prosperous future,” he said.
SICCI, as the peak body representing private sector and business community in Solomon Islands, wishes Mr Varley the best on his future endeavours. 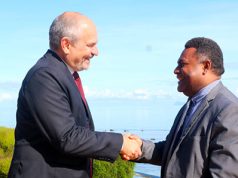