Pelican 96’s maiden trip to Gizo in the Western Province turned into disaster only minutes away from arriving in the Western Capital when it ran aground at Loga reef.
As of 8pm tonight the boat was still on the reef after first attempt by two rescue ships to salve it failed. 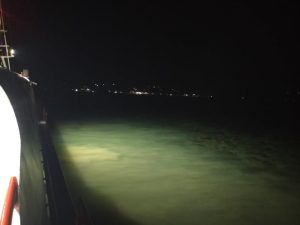 A passenger on the ship Schulte Maetoloa exclusively told SBMOnline that the boat ran aground at Loga reef just after Nusatupe Island, (where the airport is) in the final stretch to Gizo.
“The ship was running at full speed and all of sudden it was on the reef. The entire ship was on the reef even the propeller. It was very scary I was standing outside and I had to cling on strong to the place I was holding otherwise I would have fallen off,” he said.
“As I speak the entire ship is still on the reef. Two ships attempted to pull it out of the reef but they could not because the ropes were very small,” he said.
He said the incident happened after six pm and just after nine hours since they left Honiara in the morning.

“It was a good trip but sadly the boat ran aground just before we arrived,” he said.
Maetoloa confirmed that fortunately none of the passengers was injured even the boat ran aground at full speed.
He said rescue efforts were continuing and their fear was the boat would face more damages during low tide. Currently it is high tide in the Gizo area.
The tragedy happened in Peilcan 96’s first of its weekly trips to the Western Province. It should sleep over in Gizo and returns to Honiara on the same route tomorrow morning.
Maetoloa said a lot of people were waiting in Gizo to welcome Pelican but that has now been affect as the result of the problem.