Flooding encountered on Friday night at the National Referral Hospital (NRH) was due to the clogging of the old main drainage at the western end of the hospital which was worsened by debris including wastes from construction work at the seafront.
This was discovered when the NRH maintenance team conducted an inspection of the drainage system. In a similar flooding incident in 2021, the guttering system was also found to have caused improper flow of water from heavy rain that was forceful causing flooding.
Assessment from the previous flooding recommended clearing of blockage of the main drainage outlet to the sea, partly caused by road construction at the NRH seafront. This was addressed.
However, the recent flooding revealed that the main drainage from the hospital to the sea may also be clogged and not only the outlet section.
This has caused flooding into the nearby renovated ward currently used by the medical department, laboratory, X-ray, fracture clinic, operating theatre, accidents and emergency department, and others located at the Western end of the hospital.
Assessment on this will be underway and based on expert advice, the Ministry will make the decision to either do away with the main drainage system that has been in use for decades and rework a new system or clear and maintain the current one.
In the meantime, the hospital will review structural engineering options to close up the area to avoid rain water into the area of concern and rechannelling its guttering system to ensure that water run offs is diverted from the labour ward area, common for flooding.
The temporary measures are the prepositioning of water pump donated by Australia to pump excess water to a nearby open drainage and install additional pump at the exit of the drainage directly to the sea, should there be another prolonged heavy rain in the coming days and weeks.
Health Permanent Secretary Mrs. Pauline McNeil said it was an unfortunate situation that temporarily affected services and emphasised additional and serious structural engineering changes to be swiftly planned and implemented immediately as we are in the wet season.
She also informed receiving reports of roof leakages and the NRH maintenance team will be making assessment and repairs to the leaks this week.
Mrs. McNeil confirmed that the evacuation plan for NRH is on standby for activation should there be a need and Memorandum of Understandings (MOUs) with various organizations for use of their centres will be retrieved for discussions for updating.
She thanked all NRH workers including volunteers who in combined efforts worked to clear the floodwaters for hours on Friday night due to continuous heavy downpour then.
She also expressed sincere sympathy and sincere apologies to patients and medical staff at the hospital for the disruption to services and work during the flooding and acknowledged the need to get it fixed immediately.
“As such be rest assured that we have prioritized addressing the roofing and drainage system ,and will ensure that work on it is underway without any delays to prevent any more flooding of our hospital”, said Mrs. McNeil. 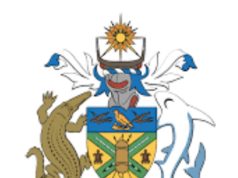