The Solomon Islands have defeated Tahiti 3-1 at Grand Hamad Stadium in Doha today, meaning they take top spot in Group A of the FIFA World Cup Qatar 2022™ Oceania Qualifiers. The game was played in unusual circumstances, with both teams assured of making the semi-finals, due to the Cook Islands and Vanuatu unfortunately having to pull out of the tournament during the week.

Solomon Islands coach Felipe Vega-Arango said in the lead up that it had been a difficult week, with his players bored of training and having to split into small groups for meals and travel. He made minimal changes to his side that beat the Cook Islands 2-0 a week ago, while for the Tahitians it was their first game of the tournament. Their coach Samuel Garcia had managed to organise a practice match against a local team, and it was the Tahitians that made the most of the early exchanges in the 30-degree conditions.

However, they gave away possession to a hungry Solomon Islands after a quarter of an hour, Joses Nawo pouncing and taking the ball all the way into the box to cross for Raphael Lea’i. His shot was blocked by Teave Teamotuaitau, but it ricocheted out for William Komasi to launch another effort that was well saved.

It was another piece of good pressure from the Solomons that eventually paid dividends, with Tahitian defender Kevin Barbe dispossessed and the ball threaded through for Lea’i to cut through the middle. His left-footed finish was impeccable, past Teamotuaitau and giving the Solomons the lead.

It didn’t take long for Barbe to redeem himself, as a Tahiti corner kick bounced around in the box. Barbe pounced on a free header and turned it in for Alvin Tehau to head the ball in and equalise only six minutes later. Tahiti almost took the lead straight after the kickoff, with a rocket of a strike by Matatia Paama just going wide, then two efforts by Tauhiti Keck only kept out by fine saves by Phillip Mango.

Lea’i remained a dangerous threat, hitting the post with a shot as the first half cracked on at a high pace. The Solomons had the best chance of the remaining time before the break, Nawo finding himself open on the left edge, but a good save by Teamotuaitau kept his shot out.

Indeed, it was Lea’i who broke the deadlock again after half-time with an end to end effort off a defensive corner. Nawo again played a key role, getting a nice through ball to a flying Lea’i to send his shot into the back of the net.

The Solomons seemed intent on profiting from their speedy counter-attack, but it was risky against the more structured Tahitians. Tehau almost pulled one back with a well-saved strike after 68 minutes, then a Tahitian free kick saw Mango come off his line and make contact with Francois Hapipi. Referee Matthew Conger of New Zealand initially pointed to the spot, but the linesman had his flag up as Hapipi was clearly offside. The Solomons breathed a sigh of relief, but the Tahitians kept up the pressure with a run of corners.

This caused a shift from the Solomons, who went to a deep press to preserve the lead. The impressive Eddy Kaspard created the best Tahitian chances for the remainder of the game, the best being another shot that was saved by Mango with four minutes to go in regular time. Deep into added time, the Solomons sealed the hard-fought victory with another goal to Lea’i off a counter as Tahiti threw everyone forward. Lea’i was deservedly named man of the match for his hat trick heroics.

The good news for Tahiti is that they make the semi-finals regardless and will await the results of the Group B games to find out their opponent. They certainly showed enough to suggest they will be a handful for whoever that is. 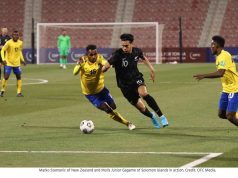 9 national players to undergo trials in Australia, 4 with A-League side