The report, Solomon Islands Public Expenditure Review: Fiscal Reform and the Path to Debt Sustainability, suggests warns that without reform, Solomon Islands’ debt may become unsustainable. It suggests that in a business-as-usual scenario, public debt will reach the Government threshold of 35 percent of GDP as early as 2026. However, if reforms are prioritized, modelling undertaken in the report suggests public debt will stabilize at about 27 percent of GDP, leaving sufficient funds for Government to address key development issues while building a stronger and more resilient economy.

“A large amount of infrastructure construction in the country is putting Solomon Islands on a bold new growth path. This includes externally funded roads and airport upgrades, sporting facilities for the 2023 Pacific Games, renewable energy, and health infrastructure,” said Annette Leith, World Bank Resident Representative for Solomon Islands & Vanuatu. “These opportunities also come with some risk and responsibilities as the new works will add annual maintenance costs of around SBD388 million (USD47.57 million). These pressures need to be carefully considered and planned for, because we know that for every $1 invested in maintenance $5 is saved on replacement costs.”

The Public Expenditure Review analyses the potential impact of the introduction and successful implementation of a Value Added Tax and models what improvements to tax collection could mean for public finances. It also highlights the potential for growth and revenue generation in the mining sector, but significant improvements to the governance and management of the mining industry is essential for these to be realized and for the sector to become sustainable.

“We have worked closely with the World Bank in their preparation of this analysis, and it provides useful guidance for government policies. We know we can expect a decline in logging revenues and identifying ways to diversify our country’s income is a key focus of this government,” said McKinnie Dentana, Permanent Secretary of Solomon Islands’ Ministry of Finance. “The Public Expenditure Review recognizes existing government work to introduce a Value Added Tax, reform inland revenue collection, strengthen the management of the mining sector and improve the efficiency of government spending.

“We are happy to be launching this insightful review and look forward to continuing to work with the World Bank to support our efforts to achieve a stronger economy for Solomon Islands.”

The new report also looks at how to improve efficiency in public expenditure, recommending a review of the Public Sector Wage Bill and better reflecting donor funds while increasing efficiency in health expenditure. In addition, the report suggests investing in local institutions so government scholarship programs could be increasingly directed to education facilities within the country instead of overseas.

“The Public Expenditure Review makes clear that there are opportunities to balance government finances in Solomon Islands,” said Lodewijk Smets, World Bank Country Economist for Solomon Islands. “However, it also shows that without concerted efforts to do so, Solomon Islands may be at risk of falling into debt distress that could be damaging for the economy and the country as a whole.

“We’re pleased to be able to provide this analysis to support the government’s policy-making to ensure the hard-fought improvements to health, wellbeing, education and livelihoods of Solomon Islanders are being secured, well into the future.”

In addition to analysis and advisory assistance the World Bank in Solomon Islands supports large scale infrastructure projects such as the Tina River Hydropower project and the Solomon Islands Roads and Aviation Project. The World Bank’s portfolio in Solomon Islands includes projects in both rural and urban centers such as the Community Access and Urban Service Enhancement Project (CAUSE), oceans and fisheries management assistance, agriculture, budget support, and collaboration with the Provincial Governments to increase rural access to economic and social infrastructure. 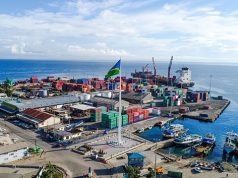 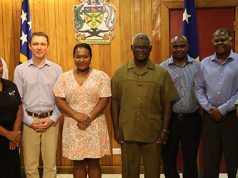