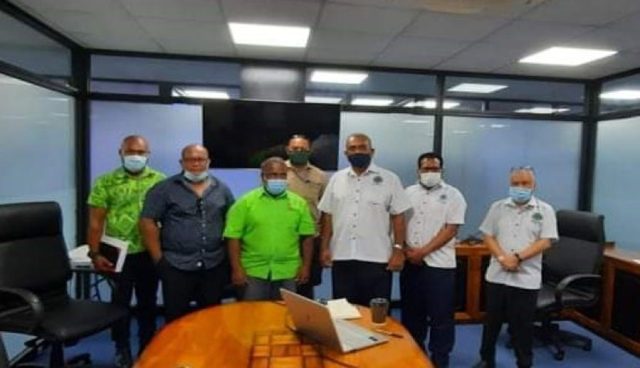 The Development Bank of Solomon Islands (DBSI) will be nominated as a (Green Climate Fund) GCF accredited entity (AE) with support from the SI GCF-SPREP Readiness Project.

The Secretariat of the Pacific Regional Environment Programme (SPREP) – Green Climate Fund (GCF) Solomon Islands Readiness project with representatives from the National Designated Authority (NDA) of Solomon Islands, the Ministry of Environment, Climate Change, Disaster Management & Meteorology held a high level discussion with the Chief Executive Officer and senior staff members of the Development Bank of Solomon Islands (DBSI) in April 2022. The meeting was a part of the SI GCF NDA proposal to nominate the DBSI to be an accredited entity to the GCF.

Speaking on behalf of the NDA representative during the meeting, Deputy Secretary Technical, Mr Chanel Iroi stated that the nomination to be an accredited entity to the GCF is critical and a priority for the SIG as the bank is supporting development at difference scales in the country. It is also part of the Government efforts to effectively respond to the impacts of climate change and build the resilience of the country’s socio-economic sector as well as long-term climate-proof infrastructure developments. The GCF is a key funding mechanism under the Paris Climate Agreement that supports developing countries’ efforts to adapt their economies to the impacts of climate change through low-emission and climate-resilient investments.

SPREP’s Climate Finance Readiness Advisor, Mr. Fred Siho Patison who is based at the Pacific Climate Change Centre (PCCC), highlighted in the meeting that the accreditation process will take some time, but the support will initiate the process for DBSI to strengthen its fiduciary policies and processes to meet the GCF accreditation requirements. He further re-iterated that such support is part of SPREP’s role as an accredited entity to the GCF in the region to support member countries.

The DBSI board meeting later in April endorsed the support for accreditation and looks forward to collaborating with the SI GCF NDA and SPREP to get the accreditation process complete. In welcoming the DBSI Board’s decision, Mr. Iroi thanked the CEO of DBSI, Mr. Nafitalai Cakacaka and said, this accreditation will enable the Solomon Islands’ respond to the threats of climate change further by opening access to GCF and climate financing to eligible stakeholders in the country. Such access to climate financing mechanisms is critical for economic growth, security and the well-being of Solomon Islanders.

The GCF Readiness 1 Solomon Island is strengthening the SI National Designated Authority (NDA) Capacity and Strategic Engagement with the GCF which include support to national entities towards accreditation to the GCF. The SI NDA support to DBSI is in addition to ongoing collaboration with the Ministry of Finance and Treasury and the National Transport Fund for accreditation to the GCF.

The SI SPREP GCF Readiness Support project is hosted by the Ministry of Environment, Climate Change, Disaster Management and Meteorology. More information about the project can be requested by contacting the National Project Coordinator, Sammy Airahui at email: [email protected]