The Guadalcanal Provincial Agriculture Division (GPAD) had conducted a three (3) days kava workshop in Hauvalisi, and Vatupuku, West Guadalcanal Constituency for both west and south Guadalcanal kava farmers in the Tina River area.

Mr. Joseph Wotomaru, the Chief Agriculture [Extension] Officer (GPG), has hailed the training a major success due to the positive turnout and as well as the amount of kava plants the farmers have at the two visited sites; Hauvalisi and Vatupuku.

“The training was quite successful compared to other places on Guadalcanal we’ve visited during the Annual Work Program rolling out plan. This is because we have the kava stages from nurseries to harvesting that already in place for full demonstrations. Furthermore, these farmers are creative in terms of washing and drying the final products,” Mr. Wotomaru explained.

“The estimated total number of kava plants these fifty farmers have is more than thirty thousand kava plants because some farmers planted more than two thousand plants on their own” he furthered, “the fact is having more kava plants and being able to well manage them at the highest level”.

Speaking on behalf of the kava farmers who attended the 3 days’ workshop, Mr. John Kuna, a longtime South Guadalcanal cocoa farmer told GP Media via the phone yesterday that he was quite happy to see Guadalcanal Provincial Government working closely with Ministry of Agriculture and Livestock (MAL) to provide such workshops for the rural farmers.

“I am quite happy to see the MAL through GP Agriculture Division giving practical kava workshops right in the village and community level. This is the way forward to include the hardworking rural farmers. We’re looking forward to having more trainings like this in the near future” he explained.

As a long-time cocoa farmer, Mr. Kuna compared the labor requirements between cocoa and kava, and stated the reason why farmers are rapidly turning into kava farming in the past three years.

“As a long-time cocoa farmer, owning a cocoa plantation requires continuous labor-intensive care for more than three years even during harvesting and drying of the beans processes. Kava, on the other hand, is more labor-manageable because as long as you have a better mulching and pruning at its early stage, then you have better maintenances until the harvesting time three to four years later down the line. So that’s why most cocoa farmers are turning into kava farming” Mr. Kuna explained.

Moreover, Mr. Wotomaru stated that the area between West and South Guadalcanal, which is also called the Tina River Delta, is known for high production of cocoa production in the past, and now kava is becoming the second most commercial plant for past 3-5 years.

“In my estimation, in the next 3-5 years, Tina River Delta would again, top the region in terms of kava farming. This is due to the rich alluvial soil which Tina River continues to deposit along its beds and the passions that these farmers have” he stated.

It is also reported that a kava farmer in the Hauvalisi area sold his kava last month earning about $30,000 (SBD). Few farmers in both areas are looking forward to harvesting their kava this year as well. 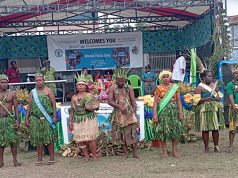